Brewed as instructed: balanced water profile US-05 SG 1.052 FG 1.010 5.5 abv. Wife and I both prefer mine to real thing. Lightly cracked the coriander and that was perfect for me. Next time may increase the orange peel but thats it. I will definitely be brewing this 1-2 times a year. My picky wife actually asked for a few pints of this here and there. 10 star recipe.

Its a good clone and the results are not bad. They give you enough spices to add more to the boil if you wish. I went with the white labs 400 and had no problems. Before adding co2 the beer smelled heavily of orange peel and coriander.

On my first batch, everything was above expectation. On 03/06/2022 I ordered 3 separate kits, 2 Blue Moon Clones and 1 Rapscallion Tangerine Ginger Wit.
I ordered all 3 kits to be milled. The 1st one I brewed was one of the "Moon brews" As I looked over the grain it didn't quite look like the milling was done very well as shown in the pictures below.. After the blazing success of my 1st order of Moon back in Jan 19th, I assumed I'm maybe I'm being over particular. However when I took my hydrometer reading before pitching the yeast, it was obvious something was wrong. The 1st batch I ordered and brewed in January the gravity reading was an impressive 1.048 with the target being 1.050, This batch with the questionable milling, the hydrometer reading came in at a dismal 1.034 ?? My gut feeling was likely correct, I don't believe the kits I ordered were correctly milled or even milled at all. I decided maybe it's time to start milling my own grain, I bought a mill I could operate with a drill motor and brewed up the next batch of Moon brew and my efficiency was spot on, the hydrometer reading came in right at 1.050... I don't know if there was a packaging mistake of what, but the moral to this story is "Mill your own" or settle for a possible lite version of what ever your making. 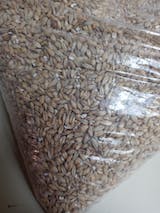 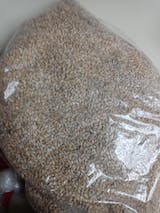 Hi, Ron here (Mr. Shawna) ~Review Part 1~ 02/06/2022 Anyway, this has been interesting so far, I'm kind of a 'brew water' nut and one thing that these kits have in common from nearly anywhere you get them is they never mention water chemistry composition for best results of the grain bill your using. One thing as a basic is, it's best to have your mash water come in at around a pH of about 5.2 to 5.6 to get the most out of your grain utilization (conversion to fermentable sugars). I came in a little more acidic (pH lower than 5.2) than I hoped, and feared it may have an effect on my fermentation. I always use a glass 6 gal. carboy for 5 gallon batches w/a bung and a overflow tube into distilled water (plastic milk jug works nicely). A regular airlock can usually work fine, but this time I'm happy I used the blow off tube method.. It took about 36 hours before the yeast kicked in but OMG.. this stuff would have blown an airlock right off the 6 gallon carboy !! I'm not sure what took place in this batch, but it's probably been 15 batches since I've had this much or any overflow.. It went completely crazy, and ran strong for the better part of 4 to five days. I did make a small mistake according to the recipe, it called out pitching the Saaz hops, Candi sugar, Coriander seed, Orange peel, and Orange marmalade in the last 5 min. of the boil, and I did it about 25 min. early (OOP's) anyway, not to worry, it's only beer RIGHT !?! Who knows.. This may all be a happy accident that adds a whole new twist on the recipe, I'll let you know. At any rate, it's been one week since creation and there will be another installment to this thread. P.S. CRUSH YOUR CORIANDER OR IT WON'T EFFECT THE BATCH !!! -R ~Review Part 2~ 03/05/2022 Last night we cracked open this beer, if you read my long winded Part 1 Post, you would know that I messed up the recipe and put in certain ingredients prior to the time they were supposed to be dropped into the boil. Well then ! Not to worry, this brew compared to the real moon is slightly different, the front end fruitiness in the flavor is more noticeable in the real thing than in my brew obviously because I boiled it out, but none the less this is a very tasty recipe ! All I had to do to bring it all together in a glass was to drop a slice of orange in there and 'Wallah' !! I highly recommend this version of Blue Moon, as a matter of fact I'm buying two more kits today ! With all the Geo-political nonsense going on in the world as of late, best stock up, stay home and brew beer !!