I was a little disappointed in the build of this thing when I got it, but I figured it was fine as long as the handle stayed firmly attached to the bucket. It didn’t need to be that tough, since I only use it once or twice a year for decoction mashing. I’ve probably only used this thing 3-4 times since I bought it.

That’s why I was shocked this weekend when I opened up my gear box and this thing was inexplicably split down both sides. Looking at it, you’d be forgiven for believing it had been subjected to hard smashing and bending. But it hasn’t. It’s in a box with no heavy gear, and at most it would be jostled now and again as I look for other stuff.

I wouldn’t have recommended this thing very strongly before. Now… caveat emptor. 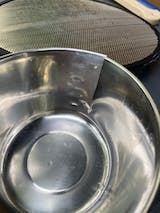